“Sophie was a young woman whose life was cruelly taken away. My first contact with the Foundation was through writing poems for Black Roses. I saw my role here as giving Sophie back her dignity, her courage and her right to reply, though to write pieces in her voice was probably the biggest challenge and responsibility of my career. I thank Sylvia for inviting me on board and giving me the licence to imagine her daughter’s thoughts and words. It is a privilege as a patron to play a small part in the great work that the Foundation continues to do.”

“When Sophie and Rob’s story hit the news, it really shook me. Little did I know that some years later I would be part of sharing their story with thousands of people across the country. I am part of this journey because I believe everyone deserves to be treated equally and difference should be celebrated not stamped on. I never met Sophie but she has changed my life. Let’s make this known.”

“Our involvement with the fantastic Sophie Lancaster Foundation began in 2008, in a chance meeting with a close family friend of Sophie’s. At the time, Julie was in Coronation Street, playing longstanding regular, Hayley Cropper, and she was handed a newly minted SOPHIE wristband and told about the trial and Sophie’s mother’s commitment to setting up an organisation in her daughter’s memory. Around two years later, we had an idea to set up and fund a creative writing competition for schools in East Lancashire and Greater Manchester, and having followed Sylvia’s story since, we decided to hold it in memory of Sophie. We set the theme of Difference and asked for poetry and prose pieces that had something to say on the topic. Difference, and the embracing and celebration of difference, seemed to us to be at the heart of the foundation’s work. The act of combatting prejudice and hatred starts with the breaking down of the divisions between us that grow out of fear of the unknown: whether that unknown is ethnicity, sexuality, disability or simple appearance and dress: cultural identity and its unique expression.

Our writing competition took place in 2011 and resulted in a beautiful book of young people’s experiences of Difference in two age categories, and a fantastic evening at the Contact Theatre in Manchester where stars of the stage and screen read the winning entries, chosen by a panel of judges that included New Order’s Peter Hook and the poet Simon Armitage. It was this evening that really cemented our commitment to and involvement with the Sophie Lancaster Foundation, and we became patrons shortly afterwards. Julie has subsequently appeared as Sylvia in the award winning “Black Roses” on stage and screen, and Ian has written a Sony nominated play for Radio 4, Porcelain, about the trial of Sophie’s killers.

We have seen the organisation grow and develop with wonder in these last few years as Sylvia and her co-workers have taken the message of love and acceptance into schools around the country, and as police forces have gradually started to recognise attacks on people from alternative subcultures as hate crimes, starting with the GMP in 2013.

We have never stopped being amazed at how Sylvia has turned her unimaginable grief into a force for good in the world and kept her beautiful daughter’s memory alive. Her work in this field only strengthens and intensifies.

We are very proud to be patrons of the Sophie Lancaster Foundation and to wear our SOPHIE wristbands every day as a reminder not just of a senseless death, but of the possibility of a better, more diverse and inclusive world in all its colours.” 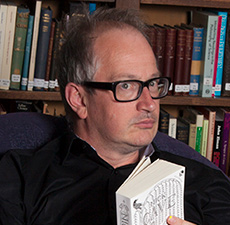 “Why do I support SOPHIE?

Humans are complicated, humans can be tribal, there are so many ways of being deemed not to fit in, the work of the Sophie Lancaster Foundation helps show people that whatever you look like, however different you seem from the outside, the hopes, wants and needs of humans are more often than not, the same. As Kurt Vonnegut wrote, “Godammit, you’ve got to be kind”. We need more tolerance and understanding, and that is what SLF is all about.”

“I am horrified by what happened to Sophie Lancaster and Rob Maltby. It seems unfathomable to me that people can be this evil, hateful, ugly and violent. I’m moved beyond words by Sophie’s spirit, loving nature and the way she protected Rob during the attack. Sophie’s mum, Sylvia is an inspiration. She founded this organisation as a legacy to her daughter, with the aim of providing education about prejudice and intolerance by going into schools, youth groups and prisons. People’s creativity and individuality is a thing to celebrate and nurture not to destroy.”

“From such a tragedy in losing Sophie, Sylvia & the SOPHIE Charity has made huge advances in hate crime and continue in the fight to stop hatred everywhere. Inspirational, determined, and alternative.”

“I became involved with the Sophie Lancaster foundation after making the radio drama Black Roses: The Killing of Sophie Lancaster for BBC Radio 4, which went on to become a stage play and then a film which is now used to support the work of the foundation. Sadly, there’s a need to tell this story over and over again as we live in a society where intolerance of difference and prejudice against minorities is widespread. The foundation works tirelessly to challenge and change this, in schools, in our communities and beyond through education and communication. I’m proud to be a patron and to continue to support the amazing and important work of Sylvia and the team.”

Director: A Place Among The Dead, The Undead Series, Take Flight, Dream Out Loud

“I think there are individuals who are such a gift to our humdrum world. They bring a little magic in their choices, wardrobe and alternative lifestyle. I have always had such admiration for them. They make our world more interesting, vibrant and exciting.

I am so honoured to be a patron of this incredible organisation. I see Sylvia and her team as warriors in the war on ignorance and hate, changing laws, changing minds and truly making our world a better, kinder place… Heroes of the highest order.”